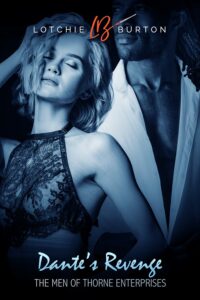 Sherry stared at her reflection in the full-length mirror, examining the long-sleeved shapeless flannel nightgown draping her body like a checkered tablecloth. Her hands and fingers grasped and twisted the soft worn material, making her wrinkled and rumpled attire…more wrinkled and rumpled. The image blurred and faded, overrun and replaced by a multitude of random thoughts chasing one after the other through her head. Thoughts of Preston and Dante intermingling and separating. The good: Dante. The bad: Preston. The ugly: this complicated mess she called a life. Haley’s tableside warning still ringing in her head was unsettling, but not unexpected. She had no doubt facing Preston would be brutal.

She closed her eyes and rubbed a finger across the fullness of her lower lip, her mind evoking and imitating the softness of Dante’s mouth on her mouth. Then she lowered her hand and wrapped her arms around her body. Holding tight. When Dante held her, he made her forget things like monsters, millionaires, single-minded lawyers and life-threatening scenarios. Cloaked in his arms, she felt protected.

Footsteps on the stairs pulled her back from there to now. Pulse quickening and cheeks burning, darker recollections were instantly replaced by their afternoon settee seduction. A flush of embarrassment washed over her like a warm shower, dousing her from head to toe. She’d crawled all over him, so willing to let him do whatever he wanted. If he hadn’t stopped, there’s no telling how far she would have gone.

No. That’s not true. I’d have gone all the way. No question. She’d wanted him. Right then and right there. She still wanted him. He’d roused every dormant feminine cell in her body and set them on fire. There was no going back to how things were. No more dancing around the elephant in the room and no more pretending that his cuddling and kissing her for comfort’s sake would ever again be enough.

Sherry twisted and half turned toward the sound of his voice, greeted by lines of concern etched in his face. Mirrored in his eyes.

“Yes. I’m fine,” she lied. She was far from fine. A twisted mass of nerves and feelings, she ached and burned. Inside and out. She’d been that way for hours. Every sense, every nerve, every shameless thought she’d ever had was reawakened. Reminding her of sensations she hadn’t felt since before Preston. Before he’d killed her desire to be in a man’s arms. Before she’d buried her physical and emotional needs in a pit deeper than hell. Before Dante.

“You sure?” he probed from across the room, standing just inside the doorway and keeping his distance. Making no attempt to move farther inside.

Her lips puckered and pinched together. She wanted his arms around her, hugging her close. His chin resting on the top of her head. His breath teasing the back of her neck.

“No. I’m not sure,” she huffed and turned to face him full on.

“About today,” she uttered, throwing her arms up and waving them wide. “About what’s really going on between us. About how you make me feel,” she said, dropping her arms and her voice. “About…how you feel about me.”

“You have doubts about the way I feel about you?” he demanded. Dante leaned his large body against the door opening, one hand pressed against the framework, the other resting on his hip. His eyebrows scrunched together, the sound of his voice low and ominous.

Determination stiffened her back and hardened the set of her jaw. “What you said earlier in the dressing room made sense,” she shrugged. “You were right. That wasn’t the place or time. But Dante. We’ve had plenty of opportunities in the last four months. We’ve literally slept together. And in all that time, you’ve never once touched me the way you touched me today. I want to know why. Why do you keep holding back?”

The statement felt cold, flat and final. As if the conversation was over before it had begun. Heat surged to the surface, inflamed her face and choked the words in her throat. “Who are you to tell me if I’m ready or not? Do you think you know me better than I know myself?” she demanded.

“No. That’s not what I’m saying.” Dante squinted his eyes, blew out a breath and rubbed the knotted flesh between his eyes. “You’ve been through a lot, Sherry. That was obvious even before all of this current drama came into play. You’re vulnerable right now and I don’t want to take advantage. I don’t want to make the mistake of rushing you into sex. You mean more to me than bouncing on bed springs to satisfy a physical need. I’m willing to wait.” Dante crossed his arms and shrugged. “Call me selfish, but I don’t want to end up at the top of your list of regrets.”

“You are a wonderful and thoughtful man, Dante,” Sherry said, clasping her hands together. “Putting my needs ahead of your own is noble, but unnecessary. I’m not made of crystal. And I’m not a mental case because of that shit Preston. I promise, I won’t break down and lose my mind if you make love to me.” Sherry moved across the room and stood in front of him. Taking his large hands in hers, she glared up at him. “I know you want me.”

“Hell. What’s not to know?” he growled, wrapping his hands around her wrists and pulling her forward. Pressing his body into hers, the length of his rigid cock firm against her. Blistering her with waves of heat and piercing her with the intensity of his gaze. “My dick gets hard and stands out like a hunting dog on point every time you walk into a room. Wanting is easy. It’s not taking that’s tough.”

“Then why, Dante? Why won’t you take—especially when I’m offering freely?” she argued, mouth dry and heartbeat pounding in her ears.

“Because. Even free comes with a price, Sherry,” he muttered, reaching up and smoothing unruly strands behind an ear. “Before we make love, I want to be sure you’re completely ready, and ready for what comes afterwards. You need to know what you’re in for with me,” he said, his already penetrating gaze slicing deeper. “I’m an all-in kind of guy, and I’ll expect the same from you. Because once we start down that road, you don’t get to turn back.”